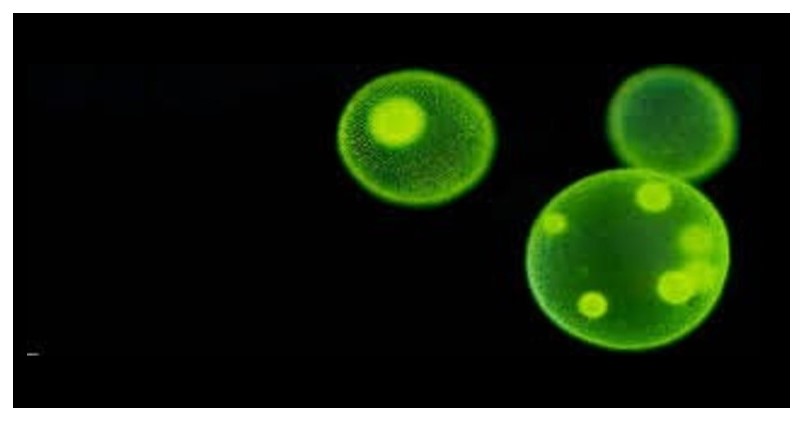 We live in an ever-changing world: the rotation of our planet, the effects of tides and the patterns of winds and rainfall means that each day tends to be different from the last. Human activity changes daily and over the seasons. This is reflected in variations in demand for energy at different time scales and the availability of energy also varies, crucially in the case of renewable energy. This leads to intermittency both in supply and demand for energy.

The ASLEE project aims to use the production of micro-algae to smooth out the intermittencies of supply and demand by providing demand side management that can be used to match the patterns of intermittency coming from other users and from energy production. Algae use light to provide energy that in turn is used to fix carbon dioxide and turn it into sugars by the process of photosynthesis. Photosynthetic bacteria, algae and higher plants evolved on a planet where natural light levels show considerable intermittencies, caused by the daily patterns of night and day, seasonality and cloud cover. Algae in polar regions can go months in near total darkness into periods where they experience light 24 hours a day. Algae are well adjusted to deal with these fluctuations in their primary energy source so there is good reason to believe that they will adjust to light intermittency when LED lighting is used for demand side management.

Of course, there is a potential cost: if algae do not receive light then respiration will deplete energy reserves and the algae will consume themselves and eventually starve but this is not a rapid process so the question is more one of productivity than survival: just how much can the amount of light given to algae be varied before production becomes economically ineffective? The answer to this also depends on the value of the use of the algae in demand side management, through allowing renewable projects to be undertaken that could not otherwise happen due to grid constraint or income streams that become available through grid balancing. These strictly economic questions are being modelled as part of the ASLEE project by the University of West Scotland but at Xanthella one of the tasks is to better understand the effects on the algae of the intermittency of light in the industrial production of algae.

For photosynthetic organisms like algae, light is energy and so we might expect that growth of the algae simply corresponds to the availability of light as a function of total energy where the other feedstocks (water, CO2 and nutrients) are not limiting. Thus algae that are given light over twenty four hours might be expected to grow at twice the rate of algae that are given the same light concentration but only over twelve hours, mimicking a natural day-night cycle. However, the situation is considerably more complex than this due to a process known as photoinhibition. Photosynthesis occurs in the chloroplast in algae and higher plants. Light is captured at the thylakoid membranes and the energy used to produce NADPH and ATP which are in turn used to fuel the Calvin Cycle where CO2 is converted into sugars.   Photons are captured by molecular antennae in the thylakoid membranes but this process damages the antennae reducing their ability to capture more photons. At the same time cellular repair mechanisms are fixing this damage. As light intensities increase, more damage occurs until a point is reached where the repair mechanisms cannot keep up with the rate of damage and the overall rate of photosynthesis drops. This is photo-inhibition.

Complicating this further is the fact that individual micro-alga in a photobioreactor do not experience identical light levels except at low densities. As the culture increases in density, light penetrates less and less distance into the photobioreactor giving a gradient where the light levels can be quite different over a few centimetres. The algae are also not in fixed positions as the water within the photobioreactor is constantly circulating so that an individual micro-alga may be moving from very different concentrations of light every few seconds: moving from zones where they may be subjected to photo-inhibition then into areas where there is insufficient light to maintain photosynthesis and then into a “Goldilocks” zone where the light concentration is optimal for photosynthesis.

Increasing the light intensity in a photobioreactor will increase the zone within which photoinhibition might be expected to occur but it will also mean that there are fewer areas where light is insufficient for photosynthesis. Changing the light intensity will, therefore, not necessarily directly relate to growth of the algae and we can expect to find plateaus of photosynthetic activity over which adding more light will have little effect on increasing the amount of algae produced. Similarly, if we make the light intermittent so that there are dark periods this will allow the repair mechanisms to fix damage quicker than if they were exposed to constant light within the photobioreactor. Xanthella are looking at the effects of both changing light intensity and changing the periodicity with which light is delivered to the algae. Initial results are very encouraging as to the potential of using light intermittency for demand side management of electricity use. A 15 hour illumination with 9 hour dark cycle was chosen as this matches the proposed availability of “free” electricity from the Ardnamurchan Estate biomass Combined Heat and Power (CHP) plant which will run 24/7 but from which the electricity is only required during the working day. What we found was that there was no significant difference in either growth rate of biomass production over seven days when the light was given constantly or in a 15 hour light: 9 hour dark cycle. Increasing the amount of light given in the 15:9 cycle also had no significant effect.

The most efficient production was actually where light was given at the 15:9 condition without increasing the maximum of light to match the amount of light given over 24 hours under constant illumination. This suggests that there is significant photoinhibition occurring at the chosen light levels but the important finding is that we can manipulate light levels (and thus use of electricity) to a considerable extent but still achieve comparable results in terms of algal production. 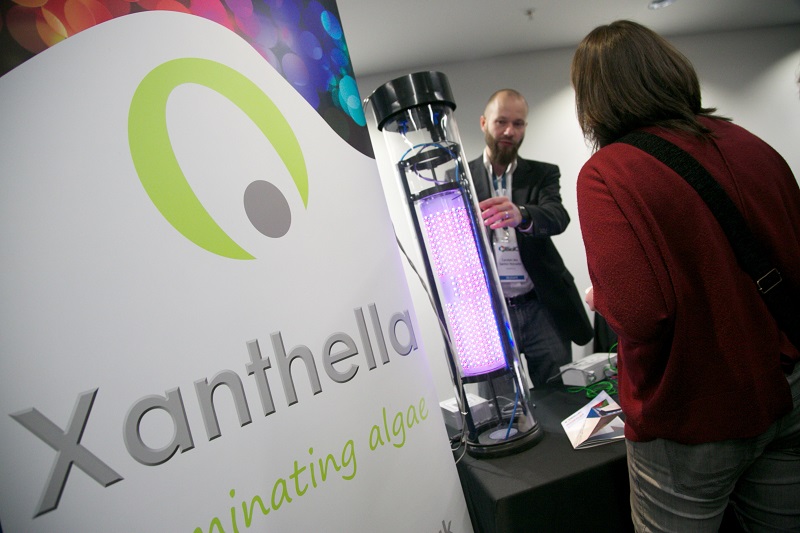 January 2017 sees the Industrial Biotechnology Innovation Centre (IBioIC) host it’s third Annual Conference in Glasgow, Scotland, which is set to showcase and exemplify IBioIC’s current and future activities; outline the Industrial Biotechnology (IB) landscape and opportunities in Scotland; whilst linking communities to forge future collaborations between industry and academia. Attracting over 300 bio-based professionals from across the UK, Europe and further afield, IBioIC is keen to place an emphasis on the trajectory of IB in Scotland, making it an attractive proposition for international investment.

‘Delivering Impact’ sets the theme for 2017 and will demonstrate the scale and breadth of activity of the sector and the opportunities available to accelerate the growth of the industry.

This is IBioIC’s biggest annual event with over fifty speakers spanning two days and delegates ranging  from high level business leaders, academics from across the UK and further afield, government representatives, and students who partake in our Skills Programme, making it is a very cost effective way to meet contacts old and new from the IB industry. Other highlights from the conference will include poster sessions, exhibition and sponsorship opportunities and of course, our networking dinner on the evening of day one. We look forward to welcoming delegates to the event.

The near final programme is available online and registration is open now: http://bit.ly/2ciL8KI