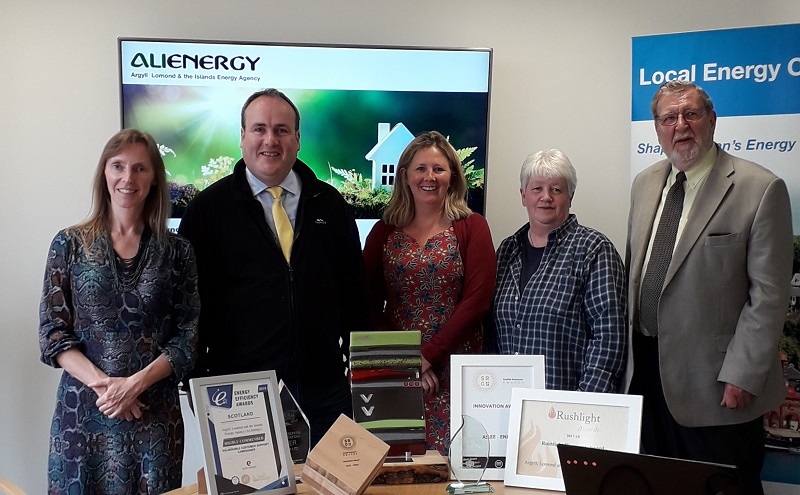 ENBIO partner and sustainable energy charity ALIenergy was delighted to host a visit by Paul Wheelhouse, Minister for Energy, Connectivity and the Islands, on 9th July.
ALIenergy Manager Lynda Mitchell, Business Development Officer Carole Shellcock, and Affordable Warmth Advisor Jenny McLeish kicked off with a presentation showcasing some of ALIenergy’s award winning projects.
These include the pioneering ENBIO (Energy and the Bioeconomy) project with partner Xanthella Ltd which is developing the innovative use of intermittent locally owned renewable energy generation to produce algal products for use as superfoods or in the aquaculture industry.
ALIenergy operates a team of five Affordable Warmth Advisors operating across the whole of Argyll and Bute, who are available for home visits to assist anyone who is struggling to pay their energy bills.
‘Fuel poverty is a huge problem in rural Scotland’, said Lynda Mitchell, Manager at ALIenergy. ‘It affects over 40% of households in Argyll and Bute, where we face multiple challenges including poorly insulated housing, bad weather, low income and elderly households, and lack of mains gas across the majority of the area leading to more expensive heating systems’.
The group then went on to discuss the various challenges of funding and operating these activities in our rural and island communities with the minister. 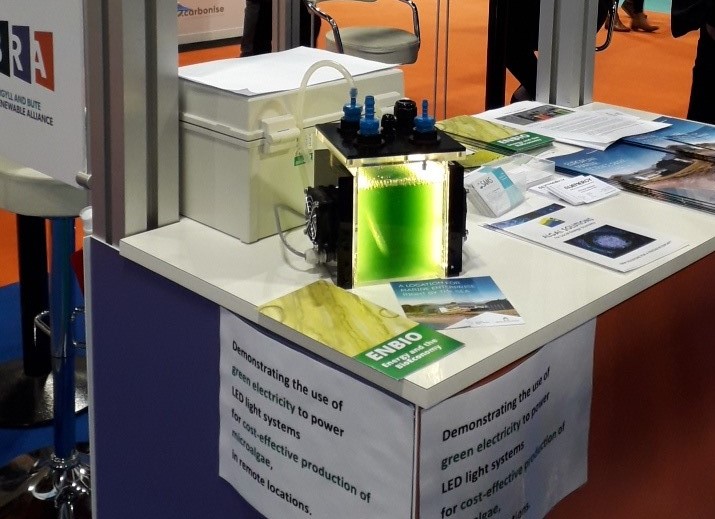 ENBIO partner Xanthella and ALIenergy joined other Argyll based businesses and members of the HIE Argyll team on the Argyll & Bute Renewable Energy (ABRA) stand at All Energy in May. The All Energy 2019 conference and exhibition, held in Glasgow, was a very busy 2 days showcasing the innovative photobioreactor and integrated energy model within the ENBIO project.

For more infromation on ALL Energy and Decarbonise events go to all-energy.co.uk 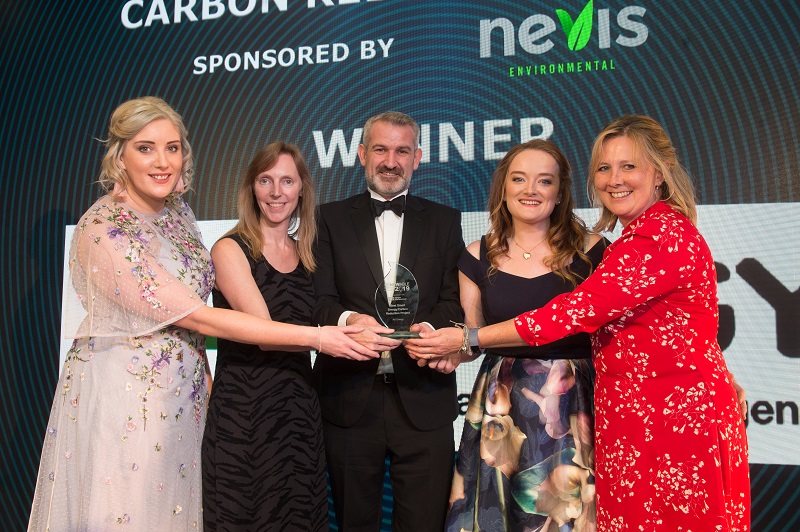 According to scientists at the St Thomas’ Hospital and King’s College London a new algae-based treatment could reduce the need for amputation in people with Critical Limb Ischemia (CLI). CLI is a severe obstruction of the arteries which markedly reduces blood flow to the extremities (hands, feet and legs) and progresses to the point of severe pain, skin ulcers or sores and often results in amputation.
Alginate from the cell walls of brown algae, which is mainly found in cold waters in the Northern Hemisphere, has been used to form small capsules containing macrophages, a type of white blood cell. The research work indicated that these macrophages successfully remained in the injured area, new blood vessels formed, and as a result, more blood reached the damaged area.
To date the treatment has been carried out on mice, Scientists are planning to move this research into human clinical trials to help the people visiting the hospital with CLI. Scientists believe that this new way of delivering cells could be the key to creating an effective treatment for people suffering from CLI.

The VIBES Scottish Environment Business Awards (VIBES) is celebrating its 20th year and is calling on Scottish businesses to play their part in protecting our planet for future generations. Xanthella and ENBIO partner ALIenergy joined other VIBES awards winners at the 20th anniversary celebrations launched at the Scottish Parliament on 27 March 2019. The enjoyable evening event included a ministerial address, case study presentations and winners question time, in which Dr Douglas McKenzie from Xanthella, winners of the Innovation category 2018, answered questions about the ENBIO integrated model and the environmental benefits of this pioneering project.
Since its inception in 1999, the VIBES Scottish Business Awards, have recognised and rewarded more than 150 businesses that have championed sustainability by identifying ways to tackle the impact on the planet by reducing consumption on its resources. This has included everything from increasing recycling and facilitating active travel to reducing consumption of raw materials by adopting a more circular approach.
Organisers of the VIBES awards are urging Scottish businesses to mark the milestone by helping to tackle the environmental challenges facing Scotland and the rest of the world. In continued celebration VIBES are also hosting a series of free regional information events with a selection of previous winners. The VIBES – Scottish Environment Business Awards roadshows will take place across Scotland, with the first of these to be held at the James Hutton Institute, Dundee, on 16 April.
Look out for further information on regional events at VIBES

EMBRIC and Treasures from the Deep were very grateful for the sponsorship and participation by Xanthella at the recent European Parliament facing workshop, symposium and roundtable –“Mining for Valuable Bioactive and Enzymes from Marine Algae and Bacteria” – held in Brussels on the 5th March 2019.

European Marine Biological Research Infrastructure Cluster (EMBRIC) held a breakfast meeting at the European Parliament, hosted by Clare Moody, MEP for UK South West and Gibraltar. Xanthella attended the parliamentary breakfast with around 20 scientists, including early career scientists, to discuss the needs and opportunities of the marine environment. The debate continued at the workshop – Treasures from the Deep – held at Scotland House, Brussels, attended by around 50 scientists and company representatives. During the scientific discussion, participants presented their current successful advances, in both oral and poster presentations, showcasing the opportunities of the marine ecosystem and highlighting the vast potential for this research, including its social and economic benefits.
A full day of lively debate ended in a round table led by Dr Marcel Jaspars and Dr Melody Clark, and joined by Ms Clare Moody and Baroness Mobarik, bringing together representatives of academia, industry and parliament to discuss the needs of the field. Among the points touched, was that academia and industry are willing to share their expertise and match their time frame to work together at a European scale, but to do so more effectively requires stronger support from European Parliament. Discussions highlighted the need for the EU to support SMEs and small-scale projects to facilitate products getting to market. Indeed, SMEs have different needs and challenges than research institutions and these have to be considered in the European funding strategy. It was stressed that the potential of marine resources and its sustainable exploitation are still relatively untapped due to regulatory limitations. Uncertainty of further funding and support at the end of large-scale projects investing in the discovery of new compounds from the marine environment has been recognized as another big limitation. The support of infrastructures such as EMBRC might partially address the need to sustain activities and interactions beyond the end of the lifetime of large projects; protecting public investments in research by enabling the generated resources to be maintained for future use and exploitation thus contributing to the blue economy.
The event was organized by Rebecca Goss (USTAN), David Smith (CABI) and Mariella Ferrante (SZN), as part of the European Marine Biological Research Infrastructure Cluster (EMBRIC).
Follow link for further information – http://www.embrc.eu/newsroom/embric-press-release-treasures-deep 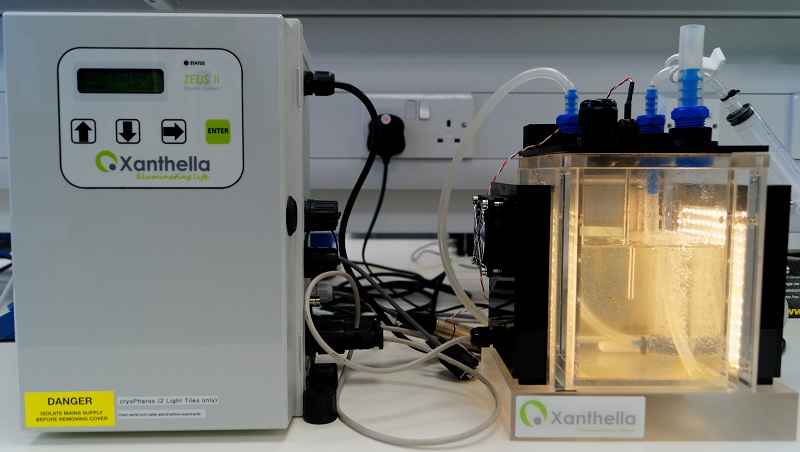 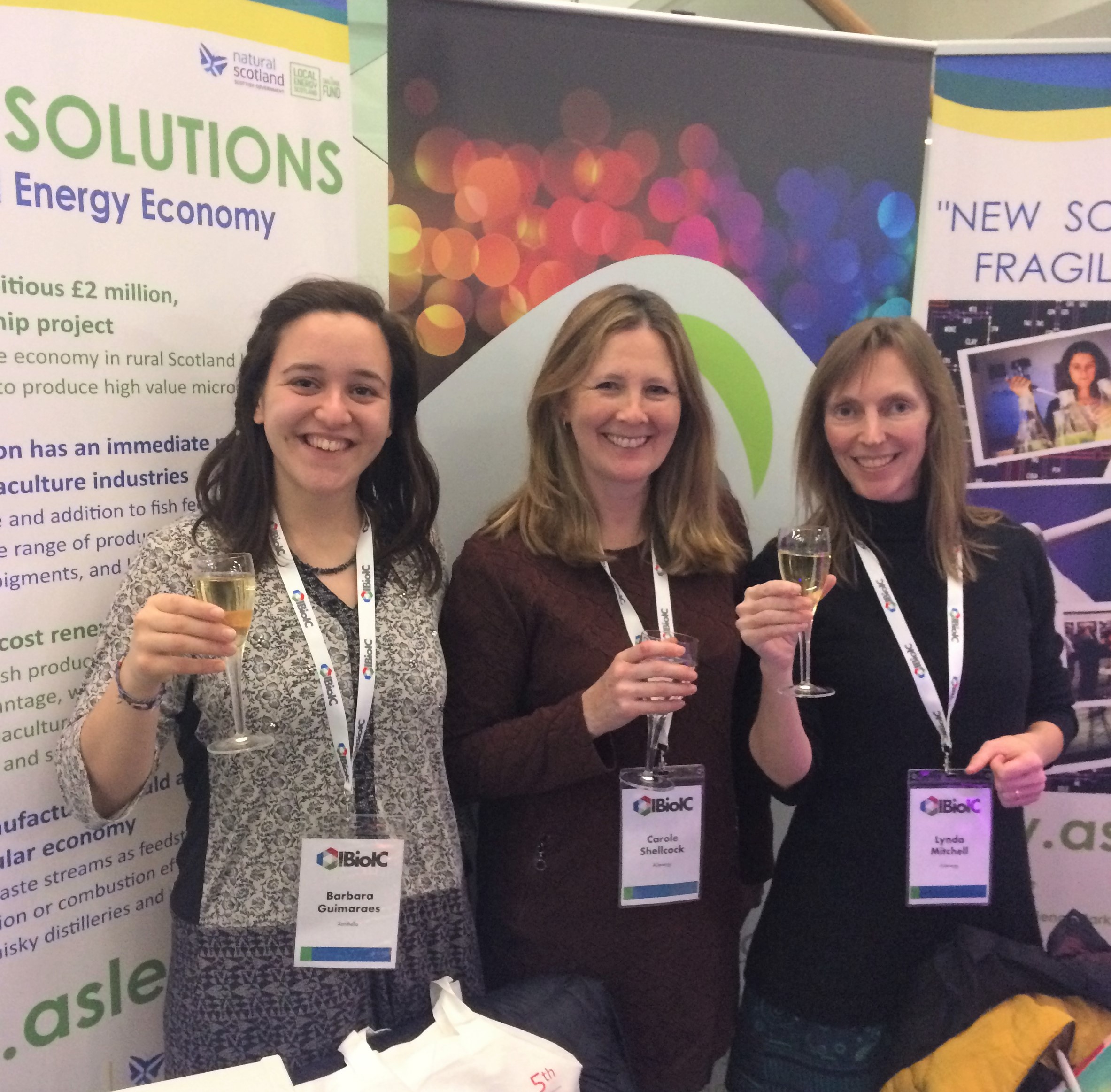 Visit us at Stand 20 in the Technology and Innovation Centre, Glasgow, on Wednesday 30th and Thursday 31st January at IBioIC’s 5th annual conference  and find out the latest on ASLEE and ENBIO!

With around 500 delegates expected to attend, hear from leading experts in industry and academia, participate in partnering meetings, visit the bustling exhibition and poster area, and network with contacts old and new, and discussing all things biotech!

In the conference sessions, listen to talks from Sebastien Jubeau (Xanthella) on supply chains and discuss carbon capture, renewable chemicals and energy with Lynda Mitchell (ALIenergy).

Hear about the progress at the Ardnamurchan production facility and read over the ENBIO poster – Route to a Local Integrated System.

ENBIO partner representatives from Xanthella and ALIenergy will be attending the IBioIC 2019 Annual Conference on 30th and 31st January 2019.  Industrial Biotechnology for a Sustainable Future is taking place at the Technology Innovation Centre in Glasgow and acknowledges the success of the biotechnology industry in Scotland.

You can also visit our stand in the exhibition hub to see the unique LED technology and photobioreactors, and find out the latest on the installation of the algal production facility on the Ardnamurchan Estate.

For conference registration and programme details go to IBioIC website.