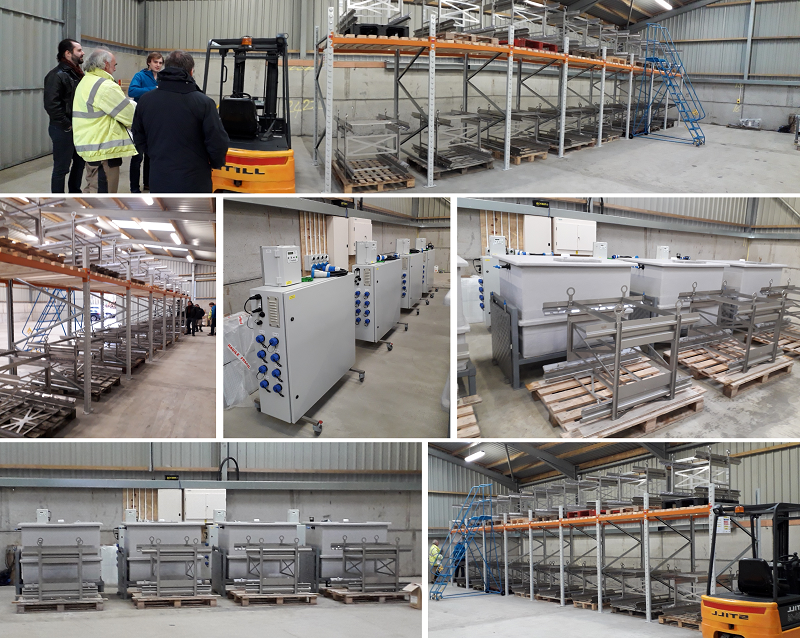 The ENBIO algal production facility at Ardnamurchan is under construction. ENBIO, funded by Zero Waste Scotland, is a partnership project conceived by Xanthella and ALIenergy to enhance the rural circular economy.

The project integrates surplus renewable energy with algal bioproduction and will see sixteen 1000L photobioreactors (Pandora PBRs™) installed at the purpose built facility on the Ardnamurchan Estate. The unique Pandora PBRs™ (developed in the ASLEE project) contain submerged LED lightsheets that will be powered by locally generated renewable electrcity.

On-site, a metal racking system has been put in place to locate the Pandora PBRs™. The two-tier structure provides a highly efficient use of space and maximises the production area. Lifting and access equipment for manipulation of the modular PBR units has been obtained. Water, drainage and power supplies are connected and ready for use. Four 700L prototype PBRs are also in place and will be used for testing and operational development. These systems will enable daily routines and maintenance procedures to be trialled and determined. The prototype PBRs will allow Xanthella and Ardnamurchan to establish standard operating practices for the running of the algal facility, as well as investigating the dewatering and downstream processing of the algae produced. An on-site field lab is to be built within the premises to provide space for inoculum culturing and analysis. The electrical power to run the algal PBRs will be 100% renewable, supplied by the local biomass CHP plant situated on the same site in a neighbouring building. It is anticipated that the algal production facility will begin operating in 2019 and will give Scotland a lead in industrial scale algal biotechnology in the UK.